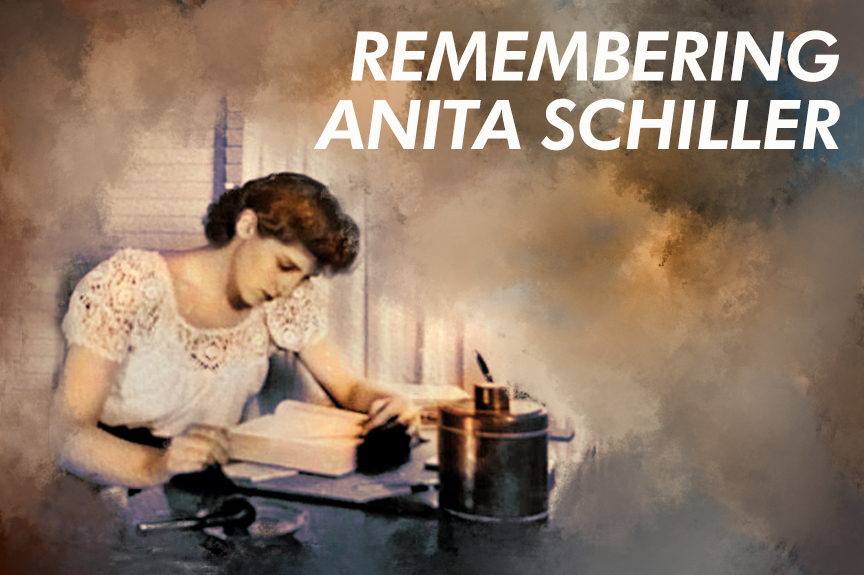 The Department of Communication remembers Anita Schiller, who died of COVID on January 23 at 94.  Anita was a librarian at UCSD, a fierce defender of the public right to information and a fighter for women’s equality in the library profession.  She was the wife of Herbert I. Schiller, one of the founding faculty members of our department, and was a loved and active member of the department community.  Anita and Herb shared the 1982 Golden PEN award for magazine writing for their article in The Nation, “The Privatization of Information:  Who Can Own What America Knows,” and Anita was named an honorary member of the American Library Association in 2007.  Kelly Gates and Ellen Seiter share their memories of Anita Schiller.

I met Anita Schiller in 2013, when I was organizing a panel on the legacy of Herbert Schiller and the UCSD Department of Communication for the department’s 30th anniversary celebration. The panelists were DeeDee Halleck, Angharad Valdivia, and Michael R. Real, who also recently passed away.

I remember how thrilled Anita was when I called to invite her, and when we met in person we became fast friends. Our next meeting was as dates to Prof. Mike Cole’s retirement dinner, and over the eight years since then we enjoyed many lunches in La Jolla together (and the occasional fancy dinner at Nine Ten in the Grande Colonial Hotel). We were looking forward to the re-opening of the café at the San Diego Art Museum, one of Anita’s favorite restaurants. I’m sad I won’t have the chance to go there again with her, where the waiters knew her and bent over backwards, no matter how busy it was, to make sure she was comfortable and got the best table.

I remember a story she told me on one of our first outings, about running into two people while on a walk in her beautiful neighborhood of Windansea. She was sure it was Mitt Romney and his wife, although she hadn’t realized it until after giving them a warm hello. “Oh well,” she said, “there’s nothing wrong with being polite.” (It was soon after the Obama-Romney presidential race.)

As others have recalled, what I remember most about Anita’s political and intellectual commitments was her deep concern about the commodification of public information, and especially the fate of public libraries. She reflected often about how excited she initially had been for the prospects for computerization, given its potential to expand access to public information and improve information systems of libraries. It was when she was invited to see a demonstration by a company selling a computerized card catalog system that it became clear to her that digitizing libraries was being envisioned as an avenue for privatization.

Anita was always so eager to hear what I was working on, and what exciting research of others I would recommend. On a few occasions I shared with her drafts of work in progress. She would read the work immediately to give me feedback, which was always encouraging and supportive. What I will miss most are the great conversations, her warmth and humor, and, despite what she called all her “this and thats” (the effects of aging), her kindness and tireless commitment to social justice.

When I think about Anita, I hear her voice.  So expressive, so deep and husky. I hear Anita’s laugh, too.  She seemed always to be in good spirits.  Despite the losses and trials of aging, Anita was a delightful conversationalist, a thoughtful and enthusiastic host well into her 90s.  As a mother and grandmother, she imparted her deep political commitments to her two sons and three grandchildren.

Anita was brilliant and cosmopolitan, gracious and charming. Her knowledge on all topics was formidable — intimidating, even. Her intellectual curiosity was colossal. Whatever topic we wandered into while visiting, Anita knew so much it made me wished our visit could last a week with her instead of an afternoon. Whenever I met her, she had remembered what I was working on at the time and had clipped something very useful for me.

“I first met her at the UCSD library in the early 1980s shortly after I joined the faculty.  She made researching my first book an adventure.  Her sleuthing skills were second to none, tracking down arcane sources and even locating the perfect cover photo.  There was a lightheartedness and joyfulness about her that I will never forget. Thinking about Anita Schiller brings a big smile to my face.  She was an insouciant breath of fresh air, with a wonderful, slightly goofy smile and a spring in her sandal-clad step.”

As an acclaimed university librarian, she predicted the problems digitization and privatization of information would bring.  As Jim Jacobs, Data Librarian at UCSD 1985-2006, recounts:

“Anita was my colleague, friend, and mentor. From her day-to-day work as a reference librarian and bibliographer, to her research on pay equity, to her insights into the effects of new technologies, she was a constant inspiration. She  was one of the first to recognize the importance of computers to libraries, but she also understood how they could increase commodification of information, reduce privacy, and interfere with free access. She was instrumental in getting data into the UCSD library in the early 1980s before most librarians were aware of the existence of “machine readable data files.” She was serious about the role of libraries in the information ecosystem, but she had a great sense of humor.  She was charming and loving and I miss her every day.”

Another of her colleagues described Anita this way:

“Anita was much more than a library mentor…. we didn’t meet until long after she had retired from UCSD. She remained highly engaged with library issues long after she retired, which is a tribute to her passion for libraries and all that they represent in the world.”

Writing with her husband Herbert Schiller in The Nation in 1982, she presciently warned against the assault on public access to information:

With almost no public notice, the national stock of information, created through heavy public expenditures over the years, is steadily being removed from government custodianship and transferred to private ownership and control. Actively promoting the privatizing of information on -% behalf of the new and already influential corporate information sector is the Information Industry Association. Founded in 1968, the Washington-based I.I.A. numbers among its more than 150 members some of the most powerful information companies in the country, including I.B.M., Time Inc. and divisions of The New York Times Company and the Chase Manhattan-Bank. On its board of directors are representatives from McGraw-Hill, Dow Jones, Lockheed, Xerox, Mead Data Central and The Washington Post Company. The I.I.A., whose members produce, package, transmit and disseminate information, claims that its primary goal is “to promote the development of private enterprise in the field of information and to gain recognition for information as a commercial product.” Commonplace and benign as that may appear, it represents the reversal of a national commitment to the ideal of public knowledgeability and the informed citizen. “Information as a commercial product” is information that is produced for profit. Who can pay for it and how much it will cost become questions that affect everyone.

Anita Schiller, for all her warmth and kindness, was also fierce in championing the rights of women librarians for equal pay. In 1970, she published an essay “The Disadvantaged Majority” in the American Library Association journal.  Two critical letters, by Laurent-G. Denis and Kenneth Plate, took exception to her argument.  In her withering response she wrote:

The way these gentlemen view it, there apparently is no need for change, because women’s presently unequal status is totally justifiable. Their argument is that women are accorded status commensurate with their inferior qualifications, and that settles the matter. If women today earn lower salaries than men and are under-represented in top level positions, these facts cannot be justified or dismissed with the statement, “This we know.”  If we know it, we can do something about it.

Even if one accepts the proposition that women librarians are professionally underqualified compared to the men, the central issue then is: why are women less likely than men to acquire advanced degrees, etc., and what can be done to overcome the obstacles to women’s professional attainment?

If Messrs. Plate and Denis believe that we must await comprehensive research findings of discrimination before we affirm a commitment to equal opportunity, I disagree; for the needed documentation will never be gathered until we challenge the traditional outlook toward women in the profession, and develop programs of action, as well as research, to overcome the present social obstacles to equality.

I consider it a tremendous privilege to have known Anita Schiller.  My only regret is that I was not able to spend more time in her company. ~ Ellen Seiter

Our condolences to the Schiller family, her friends, and colleagues worldwide. You can read the San Diego Union Tribune about Anita Schiller’s life and work at this link: https://www.sandiegouniontribune.com/obituaries/story/2021-02-04/covid-victim-anita-schiller-wsa-pi