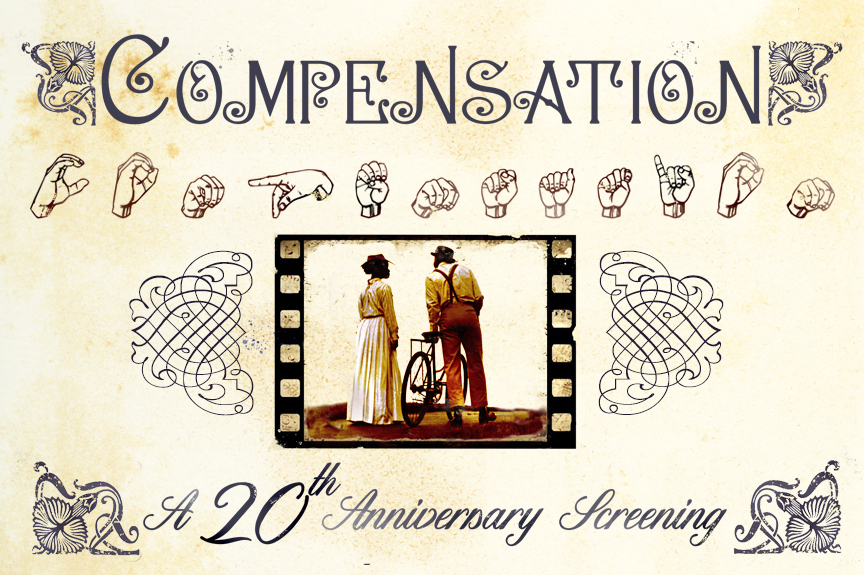 7pm: Panel discussing the film and its role as a groundbreaking contribution to critical representation of intersectional dimensions of race, gender and disability.

The event is being organized in coordination with a parallel event at the SD Public Library the following day (Friday Oct 25) https://sandiego.librarymarket.com/events/compensation-20th-anniversary-screening .

Compensation is a 1999 independent film co-edited, produced and directed by Zeinabu irene Davis and written by March Arthur Chéry, about a young African American couple at the beginning and end of the twentieth century. It stars Michelle A. Banks and John Earl Jelks in the leading roles. Inspired by a 1906 poem from early African American writer, Paul Laurence Dunbar, the unique drama explores aspects of Black culture in both turn of the century and 1990s Chicago in two parallel love stories, both about the relationship between a deaf woman and a hearing man. The film’s production began in 1993 and wrapped up in 1999. Compensation has been acclaimed at film festivals worldwide, including Sundance, Burkina Faso’s FESPACO, and Toronto International Film Festival and ran on BET-Black Starz, and Sundance cable channels as well As Compensation nears its 20th Anniversary it has garnered deserved renewed attention (See this review in the New Yorker https://tinyurl.com/NYer-Black-Film-History )

Prof Zeinabu irene Davis is an American filmmaker and professor of the Department of Communication at the University of California, San Diego, and the first African American female faculty member to reach the final stage of merit and promotion in the UC system. Her works in film include narrative, documentary and experimental film. Davis is the 2019 recipient of the George C. Stoney Award for Outstanding Documentary Work from UFVA (University Film and Video Association). She is the first person of color to win this award.  She also won awards from the Black Filmmakers Hall of Fame and the National Black Programming Consortium for Cycles (1989), an experimental short film. In addition, her works such as, A Period Piece (1991), A Powerful Thang (1991), Mother of a River (1995) and Compensation (1999) “continued to garner her awards from numerous organizations and festivals, including the Gordan Parks Award for Best Director from the Independent Feature Project” (cinema.ucla.edu). In 2017, her film “Spirits of Rebellion” was awarded for Best Documentary Feature Film at the San Diego Film Awards.

Michelle Banks is an award-winning actress, writer, director, producer, choreographer, motivational speaker, and teacher. Her television appearances include a YAHOO! Commercial, the ABC’s 10-8, the Showtime Series Soul Food, Girlfriends (UPN), and Lifetime’s Strong Medicine. She is lead actress in Compensation, directed by Zeinabu Davis. She can also be seen in Hilari Scarl’s documentary about the Deaf Entertainers, See What I’m Saying. Michelle credits Jadolphus CW Fraser, an independent filmmaker, for introducing her to filmmaking and co-directing his feature debut, ALWAYS Chasing Love. Michelle was chosen as one of 13 actors for NYC’s 2008 ABC Diversity Talent Showcase. She has appeared in plays such as The C.A. Lyons Project at Alliance Theatre in Atlanta, GA,

Pierre H. Désir is a Cinematographer, Filmmaker & Artist, and a retired professor of Haitian/Italian background, who specialized in teaching cinematography and film and video production. He served as cinematographer on award winning films such Cycles and Compensation by independent filmmaker Zeinabu irene Davis, and the documentary Bob Kaufman: When I Die I Won’t Stay Dead by Billy Woodberry. He is an active filmmaker who has made such films as The Gods and the Thief; ZoNa; and Satchmo; the Arrival of Gabriel on a Wing and a Half-note, which have screened in festivals and universities nationally and internationally.  Currently, Mr. Desir spends his days writing, painting, sculpting and cutting grass.

Awet Moges dreams of a world full of diverse human beings with complete access to stories of ancient mythologies and futuristic science fiction technology. As a writer-artist with more than 15 years of experience, he has worked in a variety of jobs from manufacturing to video game art. He is active in National Black Deaf Advocates (NBDA) and other advocacy organizations and has won several awards of recognition (House of Representatives, Cities of Long Beach, Signal Hill and Los Angeles, and the California Assembly Council people of Mayors). He is currently teaching ASL at CSULB. His first book, Pantheon: Heterotopia is the first among its kind: the first graphic novel by a deaf person and by an Eritrean American, and the first of a brand-new genre: panfuturism. You can follow him on Instagram @thanatologist or subscribe to his blog @ www.hyperboreans.com/heterodoxia