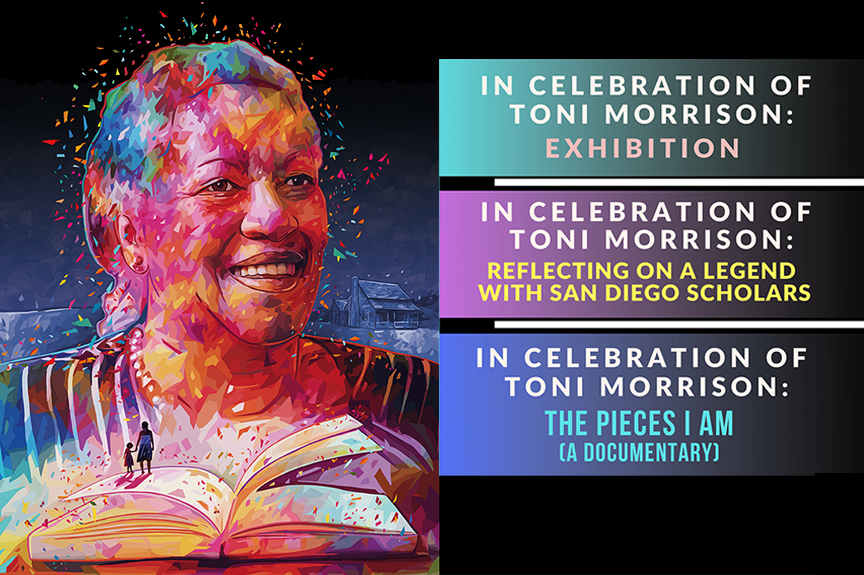 In Celebration of Toni Morrison Exhibit and Panel

Reflecting on a Legend with San Diego Scholars

Join us for a panel of scholars who will read from Toni Morrison’s works and reflect on her impact.

The practice of writing makes demands on me that nothing else does….Delving into literature is neither escape nor a surefire comfort. It has been a constant, sometimes violent, always provocative engagement with the contemporary world, the issues of the society we live in.”

—Toni Morrison, “Grendel and His Mother”

The passing of Nobel laureate, Toni Morrison, in August 2019, has been felt as an irreplaceable loss by many who were inspired by the power and beauty of her writing, her advocacy for Black writers, and the incisive and uncompromising commentary of race in the United States in her novels, essays and interviews.

This event is free and open to the public. Light refreshments will be served.

The panel will feature:

In her eulogy for James Baldwin, Toni Morrison describes the three gifts he gave her:

“a language to dwell in—a gift so perfect it seems my own invention”; “the courage to live life in its belly as well as beyond its edges, to see and say what is”; and a “tenderness, a vulnerability, that asked everything, expected everything, and…provided us with the ways and means to deliver.”

These are gifts Toni Morrison shared bountifully. Author, editor, and teacher, Morrison’s language, courage, and tenderness abide in the novels and writing she has left us, the writers and artists whose works she nurtured and championed, and the encouragement and inspiration she gave to all who carry on her legacy now and forever.

Visit the exhibit, located in the west wing on the main floor of Geisel Library, to savor Toni Morrison’s words, and to learn more about her many critically acclaimed works and her role as an editor of iconic African American literature. The exhibit will be on display from October 1 – December 20, 2019.

In addition to this panel there will also be a special screening of Toni Morrison’s film THE PIECES I AM (A DOCUMENTARY) at the Digital Gym, 2921 El Cajon Blvd, Friday – November 1, 2019. This event is free. Please RSVP at: BSP@UCSD.EDU

Directed by Timothy Greenfield-Sanders, this film is an artful and intimate meditation on the life and works of the legendary storyteller and Nobel prize-winner. From her childhood in the steel town of Lorain, Ohio, to ʼ70s-era book tours with Muhammad Ali, from the front lines with Angela Davis to her own riverfront writing room — Toni Morrison leads an assembly of her peers, critics and colleagues on an exploration of race, America, history and the human condition as seen through the prism of her own literature. Inspired to write because no one took a “little black girl” seriously, Morrison reflects on her lifelong deconstruction of the master narrative. Woven together with a rich collection of art, history, literature and personality, the film includes discussions about her many critically acclaimed works, including novels “The Bluest Eye,” “Sula” and “Song of Solomon,” her role as an editor of iconic African-American literature and her time teaching at Princeton University. Featuring interviews with Hilton Als, Angela Davis, Fran Lebowitz, Walter Mosley, Sonia Sanchez and Oprah Winfrey, who turned Morrison’s novel “Beloved” into a feature film.

This event is sponsored by:

In Celebration of Toni Morrison Exhibit and Panel was last modified: October 28th, 2019 by nareyes