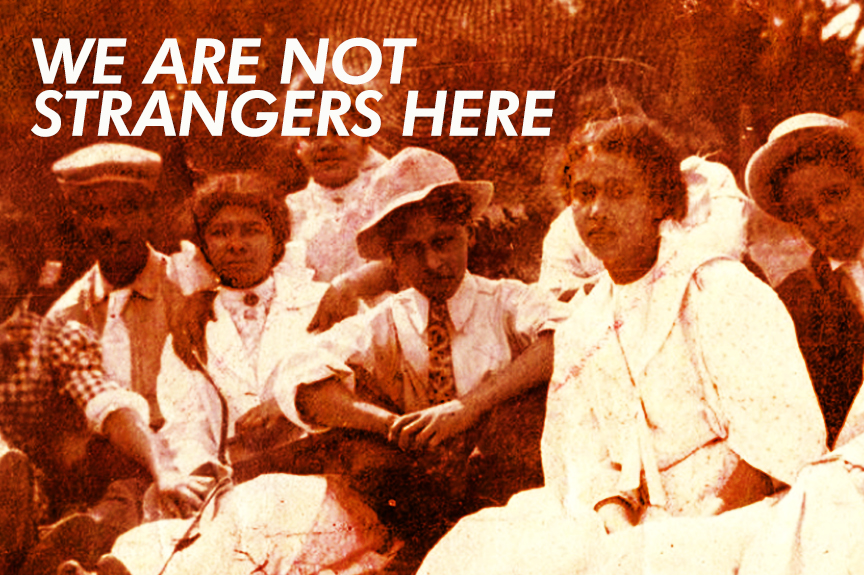 Alumna and Bylo Chacon Postdoctoral Fellow Dr. Caroline Collins premiered the first episode of a six-part Cal Ag Roots podcast which she wrote and produced, We Are Not Strangers Here: African American Histories in Rural California, on February 9th, 2021. This series highlights hidden histories of African Americans who have shaped California’s food and farming culture from early statehood to the present.

“We’re reframing California history to more accurately represent the past. We’re discussing the events that actually took place, the people who were actually here, and the things those people did. If you represent that past accurately then you have a story that is about rootedness and groundedness. It’s about how Black people are not strangers to California.”

You can listen and share this podcast at this link. Episodes are roughly 25 minutes and premiere Tuesdays through March 16, 2021.

“This project began as a conversation between the Executive Director of the California Institute for Rural Studies, Ildi Carlisle-Cummins, and Susan Anderson, who is a long-time public historian of African-American history in California. At the time, Susan Anderson was at The African American Museum and Library in Oakland. She and Ildi Carlisle-Cummins discussed collaborating on a public history project that would address the long presence of Black folks in California’s rural communities. The story of Black people in the state is often told through a framework that positions them as relatively recent migrants to California–and to its urban areas in particular. They wanted to reframe that common story by sharing these undertold histories.”

As a scholar who examines how the history of the American West is made and remade, particularly in California and especially in popular culture, Dr. Collins was drawn to this multimedia project. Collins drew from her doctoral research on this topic as well as from her former dissertation committee members including Professor Zeinabu Davis and Associate Professor Angela Booker and their respective work on mediating Black histories and storytelling. Collins was also influenced by her committee chair, recently retired Professor Emerita Valerie Hartouni, whose research on visual culture helped Collins navigate the often complex ways these stories are told and retold. This podcast also ties in with her current post-doc research working with former committee member Professor Patrick Anderson on his Breathable Streets police oversight project. Collins plans on incorporating research from this podcast into her second book which will chart the symbiotic relationship between whiteness and policing in California’s popular culture.

“I was also influenced by the work of Black historians like Delilah Beasley who, for over eight years, travelled all over California talking to these early African American pioneers and trying to find and document as many records as she could in archives across the state. In 1919, she self-published this really groundbreaking book called The Negro Trailblazers of California.

Even then, at the turn of the century, Beasley realized the significance of the Western ‘pioneer story’ and all of the systemic belonging and identity and authority that comes with it. She understood the rhetorical and material implications of who gets to be counted as the state’s ‘original pioneers.’ She wanted to make sure that these early Black stories weren’t overlooked.”

Collins is not only interested in highlighting these often undertold stories of California, her work also “interrogates racial formation in California through critically examining the evolving origin stories that structure popular retellings of its history.”

“It’s not often discussed, but Black people have been in California longer than Anglo Americans have been here in any significant number. Since the onset of 16th century Spanish colonization, Black folks–both enslaved and free–came to California as part of Spanish colonial parties. They participated in the colonial project. Roughly half of the 18th century settlers who founded present day Los Angeles, for example, were of African descent and a few were of full Black ancestry. By 1790, one in five California residents was Afro-Latina/o. The last governor of Alta California, Pío Pico, was actually of mixed African descent. Black people from the U.S. even became naturalized citizens of Mexican California in the 19th century. Black folks mined in California’s gold fields. They homesteaded. So at each of these important moments in Californian history–from the original occupation of Native lands to continued settler colonialism–Black people were here, part of the fabric of the region.”

Collins argues that a very different story of the Black Californian experience gets told through popular culture, one that focuses more on the 20th century’s Great Migration which brought her own relatives to this state from Texas.

“The story of the Great Migration of the 20th century is an important part of African American history in the state but it doesn’t represent the actual origins of Black folks and people of African descent in California. So as a scholar of Communication who studies California’s origin story, I’m interested in how these stories have been erased from public memory and how California has come to be read as white. For instance, one of the questions my dissertation pursued was how various popular culture products helped position Mexican Californians as ‘outsiders.’ Along these lines, this project helps me examine how and why Black Californians have been read solely as ‘late arrivals’ who came in the 20th century around World War II.”

This podcast offers insight into current events as well. Collins sees the recent insurrection at the Capitol as reflective of these reworked narratives regarding belonging in the United States.

“Consider a major question we’re negotiating today: How could armed insurrectionists storm the Capitol and not be immediately restrained? Among all sorts of other nuances and contributing factors, we also can’t ignore the significance of cultural narratives and how certain groups, namely white folks, have socially, economically, and politically benefited from being part of origin stories that associate them with tales of ‘strong pioneers’ and cast them as descendants of hearty folks who were allowed, and expected, to push up against the rules, to take up arms, and to carve out a nation where there was ‘none’ before. That narrative carries a cultural inheritance that justifies all sorts of actions–including those deemed necessary to pursue on behalf of securing the nation and its ownership. Those are all things I examine in my first book manuscript when I discuss what I call America’s ‘pioneer identity.’”

Using her own experiences growing up with family stories and photos of the 19th century American West that weren’t always reflected in popular culture, Collins also aims to celebrate the diverse narratives that Black communities already share through oral histories and artifacts.

“I’m also just really excited to share a narrative that’s ‘been known’ to so many Black folks already, my family included. For a lot of us stories that represent our lives in the early American West have been a part of the fabric of our everyday life. These are stories we share at family gatherings and pass down through generations. These are the types of photos we have in our family albums. At its most basic level, this is also a series for other Black people to enjoy–to just savor these stories about ourselves. It’s been a true labor of love.”

Collins was introduced to the project by fellow graduate student Erika Ramirez-Mayoral who was already working with the California Institute for Rural Studies on a different project based in the Coachella Valley. When Ramirez-Mayoral told the Institute about Collins, who was completing her dissertation at the time, the Institute contacted Collins about joining the We Are Not Strangers Here project.

“I began with a lot of archival research–searching various state archives, in person and online, for photos and other images or documents for the Exhibit’s traveling banners. I also had the benefit of working with the project’s Primary History Advisor, Susan Anderson who is the History Curator and Program Manager at CAAM. She has a wealth of knowledge and provided me with so many valuable leads. I also searched for interview subjects and because of my past media work and my growing involvement with the research, I was asked to write and produce the project’s podcast.”

Collins and her colleagues are also amplifying narratives about rural African-American communities in California and the importance of Black farmers and agricultural achievements which are often obscured by an “inner city” narrative.

“We’re also doing some important reframing around notions of Black folks and the natural world. Often ‘Black’ and ‘urban’ get collapsed on one another, right, so we go into environmental history of race scholarship in the podcast. The stories we’re sharing also counter narratives that tether Black people’s relationship to the land solely through a lens of oppression like enslavement and sharecropping. We discuss Black people’s relationship with the landscape through agricultural innovation, through homesteading, by working the land, ranching, and farming–all sorts of things that offer new understandings of race, settlement, and belonging in California. And then on top of that we look at how Black Californians in rural areas were also making all of these civic contributions to the state. That’s important because although the Civil Rights Era is certainly significant, one reason why California is known as being so progressive actually has to do with these early Black pioneers. As early as 60 years before Brown vs. Board of Education you have people like Edmond Wysinger who in 1890 fought to make sure that Black children and others like Native children could get an education in the state at a time when increased Anglo migration to California had resulted in an influx and hardening of Jim Crow. He was a rural homesteader who, when the local public high school in Visalia wouldn’t admit his son, he took on the teacher and the school district–all the way up to the California Supreme Court to secure a decision that forever altered the state. So, we can see this legacy today in the midst of current social justice activism. In many ways, Black folks are not asking for equal rights as a new group of Californians. We are reasserting our demands.”

“This work is all feeding into my next research project that I’ll begin after I complete my first book manuscript. I’ll examine how both whiteness and codified police practices in California operate as these visible and invisible vehicles of legitimacy and power. They’re simultaneously entangled and symbiotic and they both get taken for granted as common sense. So this public history podcast and traveling exhibit allowed me to identify, locate, and recover critical archival evidence of Black folks in rural California that predates and counters current imaginings of race in the state—current imaginings that in many ways underpin contemporary police practices. That makes a project like We Are Not Strangers Here extremely timely in my view.”

Dr. Collins studies public remembrances of the American West through archival methods, ethnographic study, media production, and public history exhibition. She earned her B.A. in American Literature and Culture from UCLA, an MFA in Creative Writing from UC Riverside, and a Ph.D. in Communication from UC San Diego in 2019. You can read more about her research, media making, and teaching at her departmental profile here: https://communication.ucsd.edu/people/profiles/collins-caroline.html.

Congratulations, Dr. Collins, on an impressive achievement! You can listen and share this podcast at this link. Episodes are roughly 25 minutes and premiere Tuesdays through March 16, 2021.