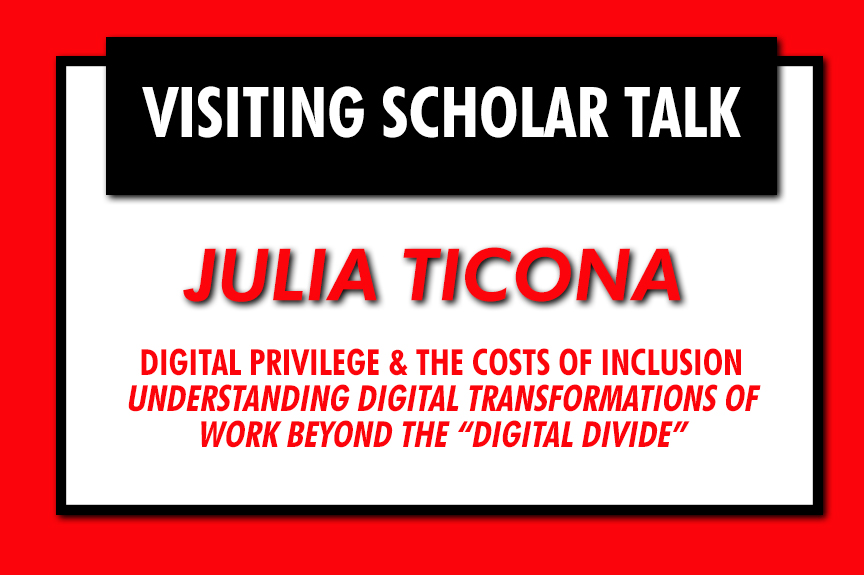 Digital privilege & the costs of inclusion: Understanding digital transformations of work beyond the “digital divide”

Public discourse about the role of technology in the ‘future of work,’ has been characterized by conflicting images of the fates of high and low-wage workers. Highly educated freelancers, freed from their employers and offices by mobile technologies and ubiquitous internet access struggle with overconnectivity and overwork; while low-wage blue-collar and service workers are being automated out of their jobs and on the “wrong side” of the digital divide, lacking skills and tools that could help them adapt to 21st century work. These images aren’t necessarily wrong, but they’re dangerously incomplete. Through interviews with 100 high and low-wage “freelancers” I find that workers at either end of the labor market rely on their digital technologies to help them find, secure, and maintain “gig” work. However, they do so from different locations of power and privilege. Far from being excluded from the “information society,” low-wage workers are increasingly expected to maintain connectivity, but are often explicitly prohibited from using their technologies by employers and exploited by phone companies. High-wage freelancers struggle with overconnectedness, and leverage their financial and cultural resources to construct forms of digital privilege that allow them to succeed in competitive markets. Models of the “digital divide” are insufficient to explain the ways that social inequalities, including race, class, and gender, affect digital inclusion, and point to the necessity of both process-based and relational approaches to digital inequalities research.

Julia Ticona is an assistant professor at the Annenberg School for Communication, where her research investigates digital communication technologies, inequality, and identity. She uses qualitative methods to examine the role of mobile phones, algorithmic labor platforms, and data-intensive management systems in the construction of digital inequalities in the labor market. Her book, about the “digital hustles” of high and low-status freelancers in the gig economy, is under contract with Oxford University Press. As a postdoctoral scholar at the Data & Society Research Institute, she collaborated on an amicus brief on behalf of Data & Society for Carpenter vs. U.S. before the U.S. Supreme Court, and led the first empirical investigation of carework labor platforms. Her work has been supported by the National Science Foundation, the Robert Wood Johnson Foundation, and the Kellogg Family Foundation. She received her Ph.D. in Sociology from the University of Virginia, and her B.A. from Wellesley College. You can find her work in New Media & Society, Information, Communication, and Society, as well as Wired, FastCompany, and Slate.