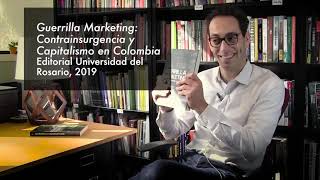 Dr. Alexander Fattal recently published a book based on his doctoral dissertation which subsequently won the book award of the Global Communication and Social Change’s Division of ICA for his book Guerrilla Marketing: Counterinsurgency and Capitalism in Colombia. His book has already received the Sharon Stephens Prize by the American Ethnological Society, Honorable Mention for the Society for Latin American and Caribbean Anthropology and has been reviewed by the New Yorker, Revista: Harvard Review of Latin America, and Cultural Anthropology’s Visual and New Media Review.

Dr. Fattal’s experimental short film Limbo, released around the same time, features the story of one former guerrilla soldier shot entirely in the back of a moving truck which acted as a mobile camera obscura. His film continues to receive acclaim with its most recent award for Best Short Film at the Latin American Studies Association’s Film Festival.

Limbo has been making the film festival circuit with screenings at the Sheffield Doc Fest (UK), Bogoshorts (Colombia) where it won Honorable Mention for Best Documentary Short, Cinema du Reel (France), and the Lasa Film Festival (Mexico). You can view a trailer for Limbo here.

In an in-depth interview last year, Dr. Fattal discussed the theory and methods behind this book as well as its relationship with Limbo. Watch the video at our Youtube channel at this link: https://youtu.be/jVFWp713Yp8.

In Memory of Gayatri Singh