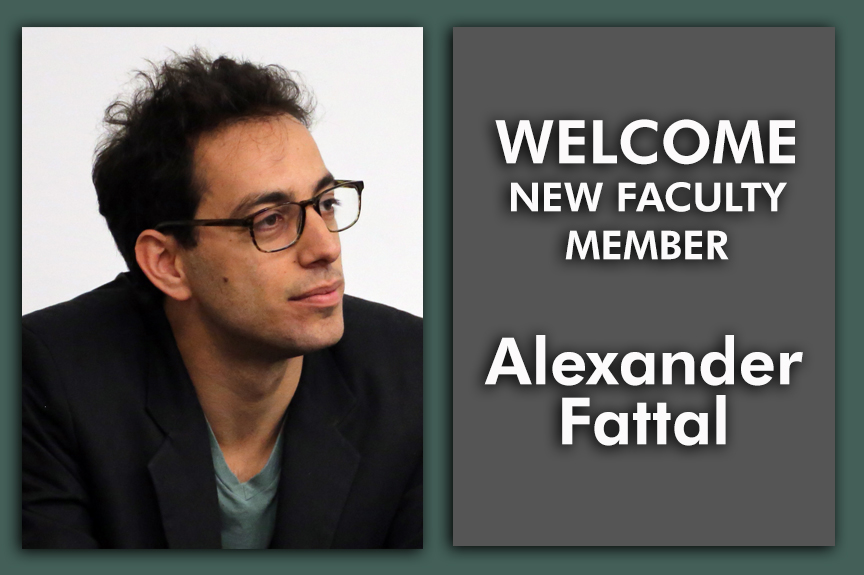 This fall we welcome Assistant Professor Dr. Alex Fattal as one of our newest faculty members. Dr. Fattal was a Mellon Post-Doctoral Fellowship from the Mahindra Humanities Center at Harvard University, where he completed his Ph.D. and M.A. in Social Anthropology. Most recently Professor Fattal was a member of the faculty in the Department of Film-Video and Media Studies at Penn State University.

Dr. Fattal has published books and films on his primary area of research which he describes as “the representational politics surrounding Colombia’s war and the fitful efforts to forge a less violent future in that country.” Dr. Fattal describes his work as deeply interdisciplinary, crossing and connecting fields such as media studies, socio-cultural anthropology, Latin American Studies, and the documentary arts. And he traces his interdisciplinarity can be traced back to his undergraduate studies at Duke University, where he majored in Comparative Area Studies.

“I have always felt that the most interesting work in the academy gets done on the edges of the disciplines, in the contact zones,” he said, as a way of explaining his excitement about joining UC San Diego’s Communication Department.

“This is a department I’ve been looking at for a long time. I love the fact that you have so many great young faculty joining such a storied department. It just feels like I am in the right place at the right time.”

Dr. Fattal’s recently published book Guerrilla Marketing: Counterinsurgency and Capitalism in Colombia (University of Chicago Press, 2018) recently won the Sharon Stephens Prize by the American Ethnological Society and an Honorable Mention for the Society for Latin American and Caribbean Anthropology’s book award. Both will be awarded at the American Anthropological Association meetings in Vancouver in November. Guerrilla Marketing has been reviewed by the New Yorker, ReVista: Harvard Review of Latin America, and Cultural Anthropology’s Visual and New Media Review.

“Now that the hyped Colombian ‘peace agreement’ lies in tatters, Fattal’s meticulously detailed book is not only timely but theoretically refreshing and politically astute. Combining peasant stories of life in the guerrilla with a top-down view of media manipulation, it opens us up to novel understandings of the use of images and the power of anthropology.”

Dr. Philippe Bourgois, an anthropologist at UCLA called it “a remarkable ethnography.”

In addition to academic publications and films, Dr. Fattal has also published an Opinion piece on his research in Colombia for the New York Times in both English and Spanish.

Dr. Fattal has recently released a documentary film entitled Limbo which was shot entirely in the back of a truck that he transformed into a giant camera obscura. The film is an oneiric journey into the life of a former guerilla fighters from the Revolutionary Armed Forces of Colombia (FARC). The project was influenced by his time as a member of Harvard’s Sensory Ethnography Lab and its emphasis on a phenomenologically-informed, observational style.

“The Sensory Ethnography Lab gave me the space to find my own vision as a filmmaker.”

Dr. Fattal also collaborates with immigrant, refugee, and marginalized communities namely through his work with the San Diego based non-profit  AjA Project, which is dedicated to photographic and multimedia education for youth affected by war and displacement. Dr. Fattal was a founding member of the AjA Project in 2001 and is now a member of its board of directors.

“This course analyzes the circulation of images as they roil across the globe in a series of episodic events and neo-colonial adventures. We look back to the Vietnam War and the end of the Cold War to understand the political logic of spectacle as it is developing through a global dialogue of violence.”

In Spring he will hold a junior seminar (COMM 190) on “Photography: Between Social Change and Social Media” in which students will discuss the transformation of photography since the rise of social networking and the ways in which it can be harnessed to affect social change. Dr. Fattal will bring his work with the AjA Project into this course,

“…picking up on a thread in the literature about photography that’s not so pessimistic, and trying to look at imagery as a realm of reimagining.”

He will also be teaching Media Arts, Media Activism (COMM 113T) where students will explore the works of artists whose activist-oriented practice repurposes public space.

“Beyond studying contemporary artists such as Banksy, Doris Salcedo, JR, and Ai Weiwei, students will conceptualize their own “artivist” intervention on a pressing global issue of their choosing.”

“I was really struck by the intellectual curiosity of the graduate students when I visited. That was one of the most impressive parts of the interview.”

Making Out in the Mainstream: GLAAD and...