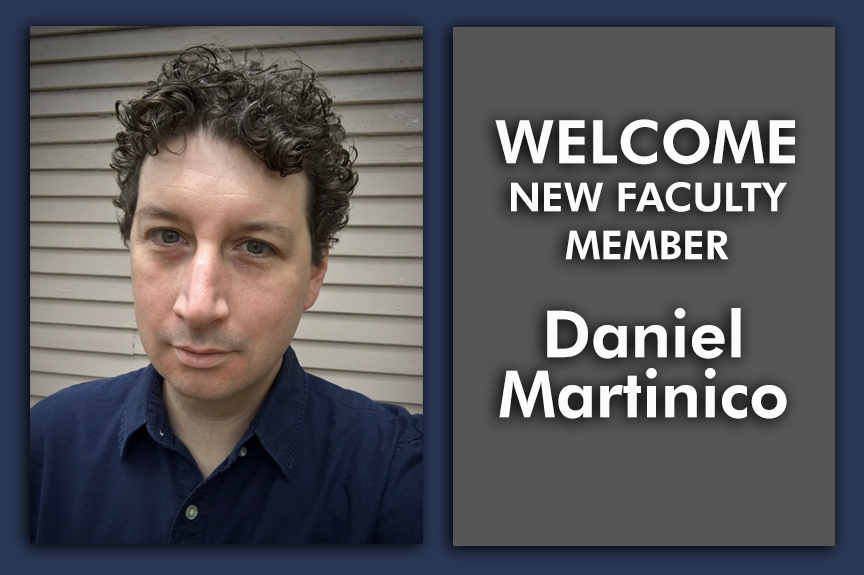 This fall we welcome Daniel Martinico as an Assistant Teaching Professor in media production.  Professor Martinico completed his MFA in Visual Arts at UC San Diego and holds a Bachelor of Arts in Film and Electronic Arts from Bard College.  His extensive experience as an independent filmmaker, experimental media artist, and industry professional shape his approach to teaching, which focuses on critical media practices and production.  Prior to this new appointment, Professor Martinico taught as a Continuing Lecturer within our department for over a decade, establishing a reputation among undergraduates for classes that combine film history and analysis with rigorous hands-on projects.

Professor Martinico’s creative work has been exhibited widely at film festivals, galleries and museums, including the Los Angeles County Museum of Art, LA Filmforum at the American Cinematheque, Anthology Film Archives, VideoEx Zurich, Rencontres Internationales Paris/Berlin, Il Cinema Ritrovato at the Cineteca Bologna, and Kurzfilmtage Oberhausen.  His professional activities also include numerous collaborations as an editor, cinematographer, and producer of narrative, documentary, and experimental film projects. In addition, he regularly serves as a programmer for the Slamdance Film Festival, in Park City, Utah.

Professor Martinico will be teaching a variety of media production courses for the department this year, including COMM101: Introduction to Audio-Visual Media Practices (Winter 2020).  This class introduces students to the language and practice of production, exploring a wide range of foundational technical and theoretical skills used to produce media in our more advanced courses.  This quarter and subsequently in Spring 2020, Martinico will also be teaching COMM101D: Non-Linear Digital Editing and COMM101N: Sound Production and Manipulation.  In these courses, students explore more complex techniques and creative strategies of media-making through individual and collaborative projects in editing and sound design.  Martinico uses his own experience as an editor to inform this coursework, encouraging students to think critically about their source materials, and to actively analyze and deconstruct the media around them.

With this new role in the Department of Communication at UC San Diego, Professor Martinico looks forward to collaborating with his fellow media production colleagues in the upcoming Democracy Lab and continuing to work closely with students on their media projects.  “I’m thrilled to be teaching production to such engaging and enthusiastic students, in a department with a deeply creative, collaborative, and interdisciplinary spirit. I am very excited about what the future here holds.”

Welcome, Professor Martinico!  We look forward to seeing what kinds of innovative and rigorous instruction you bring to our department’s production program.