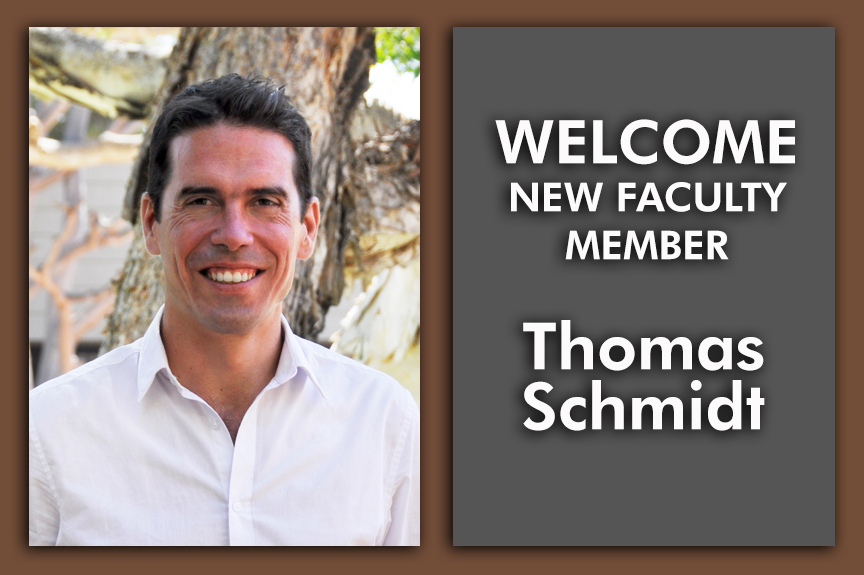 This fall we welcome several new faculty members, including Dr. Thomas Schmidt. Dr. Schmidt comes to the Department of Communication with master’s degrees from the University of Vienna where he studied philosophy and the University of Oregon where he studied literary nonfiction before completing his Ph.D. in the School of Journalism and Communication. Before embarking on his academic career, Professor Schmidt was a reporter at ORF (Austrian Broadcasting Corporation) and wrote for Kleine Zeitung, Austria’s second largest daily newspaper as well as the monthly narrative magazine Datum. He has also served as Director of “biber-Akademie,” a training program for young would-be journalists from immigrant families in Vienna. In 2012 Dr. Schmidt was awarded a Transatlantic Media Fellowship by the Center for Strategic and International Studies (CSIS) in Washington D.C.

In June, Dr. Schmidt published his first book Rewriting the News: The Storytelling Movement in American Print Journalism, which explores the emergence of “narrative journalism” or “journalistic storytelling” in the late 1960s and considers how this genre of journalistic writing fundamentally transformed the newspaper industry over the course of the subsequent four decades. Columbia University Professor (and our own Emeritus Professor) Dr. Michael Schudson remarked that Dr. Schmidt’s book “offers a detailed, rich, and fascinating account of the narrative journalism movement from the Washington Post to the St. Petersburg Times to the Oregonian and beyond. No one else has done this and Thomas Schmidt has done it with deep research and strong writing himself.”

Dr. Schmidt brings to the department a “dual passion for philosophy and research” and brings both to bear in exploring how journalism is practiced today in what he calls an “era of disruption.” His approach to the study of journalism favors a mix of cultural analysis and institutional theory while also drawing on classical texts from sociology, political theory and cultural anthropology in order to develop new ideas about today’s ever-changing media landscape. “The big question right now is how the interplay between technology and business pressures affects the production of news and the ways in which people learn about what’s going on in their communities and in the world.”

In his first year at UCSD, Dr. Schmidt will be teaching a COMM 190 seminar on literary journalism and a class on “Media and Democracy.”  In the junior seminar, Professor Schmidt will be engaging with students in discussions about how literary journalism challenges the traditional journalistic norm of “objectivity” that evolved over the last century. One of his many goals in the class is to create a context in which students might explore: how literary journalism offers a distinct way of describing the human condition and has the potential to evoke empathy while simultaneously revealing structural political and social issues. In learning about journalism, students will also be looking at the cultural history of the U.S. and questions of democracy and societal change, using specific stories from newspapers and books from the 20th century to look at issues such as injustice, inequality, and human rights. “Through the story of the individual you can illuminate the larger questions that are hard to grasp in abstract terms. So it’s about telling a story but also touching on structural and even philosophical questions…an interpretive lens through which to look at the evolution of the U.S.”

In his “Media and Democracy” class in Spring 2020, Dr. Schmidt will be looking at the ways in which journalism shapes, mediates and influences political processes. “With so much attention on polarization, disinformation, the presidency and the impact of social media, there is no better time to teach this class. We’ll analyze current events by connecting them to historical patterns as well as new social, cultural and technological trends.” The class will also explore how journalists can better serve their communities. “Typically in journalism studies you study journalists and what they think or do but there is little focus on what people actually want and need from journalism. For example, we increasingly see the existence of “news deserts,” places where communities are not being served by journalists at all.”

This class ties directly into the pursuits of the Democracy Lab which is currently under construction and planning (which is another reason he chose to join our department). When Dr. Schmidt first visited our department he felt that “it was tangible that people really read each other’s work and respected each other. We are all in this together – faculty, staff and students. What I love about the department is that it’s interdisciplinary. It’s critical. It’s cutting edge. And it brings different kinds of people to the table from different disciplines. This is an intellectual community I was craving to join.”